Like the forces of good and evil in a Harry Potter knock-off, educators and stakeholders are aligning to debate the purpose of a college education: is college about earning power? Or learning? 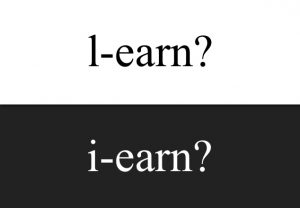 To most of the academic community there are clearly defined white hats and black hats. The white hats (call them Harry, or Frodo, or Ender) love the liberal arts: the ideal of professors with elbow patches sitting with small groups of students on a grassy knoll, passing on knowledge. They are horrified to see economic measures applied to four-year degrees.

And Gollum/Darth/Voldemort? The black hats expect employability to be a central goal of a college education. Some think student loan interest rates should be tied to the academic degree program of the lendee and perhaps the proven value-add of the institution. So Computer Science majors at Stanford would get low interest rates while Social Work majors at mid-tier private institutions would receive, from loan-granters, the same deal as a bankrupt municipality in Greece (or California). Perhaps some academic majors wouldn’t be credit worthy at all.

I don’t see how anyone could attack such a system of incenting/disincenting the pursuit of academic programs; students need to understand the consequences of studying a field without a large economic payoff. A recent article in the Wall Street Journal profiled a graduate from Goucher College with over $100,000 in student debt and a Political Science degree. The student “hoped his political-science degree would land him a job with the government.” Perhaps if his loan had been at a 11.5% rate he, and his parents, would have thought twice. And if Computer Science had a 0.9% rate? This economic inequality might have led him to look at what government workers actually make, then apply some 8th grade level basic math, discovering that the economics for Poly-Sci don’t add up. Even if he got a job after graduation.

Why is this hard for any relatively educated person to figure out? Aren’t students in $100,000 of debt like the maid who bought a $600,000 house in California in 2006 by borrowing 95% of the money (110%)? Are the villains rapacious mortgage brokers and colleges that allow their seemingly ignorant customers to get so deep in debt? Or the under-informed individuals who spend more time deciding on a flatscreen TV than debating the huge financial questions that can destroy their lives?

How much of this poor decision making, which has fueled immense economic booms benefiting financiers at the expense of the middle-class, can be laid at the feet of our education systems?

If our K12 schools and universities really wanted authentic measures of “outcomes” we’d look hard at these stories, trotted out by the media to show how terrible someone is (I’m not sure who they’re really picking on). Who cares what US high school senior’s math SAT scores are, or what place in international rankings the US lands, if 35% of college graduates enter into disastrous second mortgages 10 years later? Doesn’t co-signing on a high five-figure loan for your child today, or taking out an interest-only loan in 2005, invalidate any college degree you might have earned previously?

Is the root cause ignorance, greed, or laziness? Will the Common Core save the day?

It doesn’t help that the white hats and black hats use the kinds of simplistic or outright illogical arguments that should be thrown out of ANY degree program.

At a recent Competency Based Education conference, a senior administrator from a major community college system, argued (with a straight face) that the dramatic changes his program had brought to online options for students were working because:

To argue that our academic strategies are working because more students are getting good grades and are completing more credit-hours per term is circular reasoning on an epic scale. And is it really helping if those increases are applied to Political Science academic programs? So we’re potentially graduating more Political Science majors, faster (with less debt, granted).

At the same conference there was a lot of talk about accepting credits from MOOCs (a senior SACS official provocatively challenged all the institutions present to accept credits directly, assuming the MOOC-graduates had taken proctored exams) and the irrelevance of portfolio-based assessment because it is too time consuming.

So the world of college achievement will be measured by industrialized, proctored online multiple choice exams.

Those mourning the death of the liberal arts degree, however, are equally guilty of poor reasoning. Most commentators assume either a liberal arts education continues, at $45k/year, or Western Civilization comes to an end. They also assume that, while the knowledge might be important in a perfect world, there are no jobs for graduates. Academic degrees that sound like effective training for the working world must be a good thing. Degrees in “Business Administration,” “Marketing,” “Graphic Design,” “Education,” “Hospitality/Tourism,” or “Communications” sound like programs that will be useful for obtaining full-time jobs upon graduation. These are also degrees that are heavily promoted by aggressive traditional institutions and for-profit educators. But Salary.com took many of these UG degrees to task for ROI last fall – read the article here – and an undergraduate business degree from an undifferentiated university is a running joke amongst education’s cognoscenti.

But what do employers really need? According to the Wall Street Journal, all the skills that you learn when studying the liberal arts.

The whole mess is an argument for the kinds of outcomes introduced by the Lumina Foundation in their Degree Qualification Profile. We need engineers with far more rigor to their communication, collaboration and thinking skills. Sociology majors with deep statistical and research chops (which most UG programs do NOT require – the math is too hard) could be hugely valuable to the booming world of social networks and big data sets. If we don’t connect college outcomes to the needs of employers, universities risk entering a death spiral of irrelevance. If UG degrees increasingly become extensions to a high school diploma, the value in the eyes of employers decreasing, then the parents scraping together $40k a year for tuition are going to stop. They’ll go the MOOC/Straighterline route and the brick and mortars will become Tumbleweed U, saddled with big mortgages on their new student centers and posh dorms.

Whether employers can really discern differences in value-add from universities, and whether they ultimately care, is the subject for another post. But the importance of the liberal arts AND considering employability shouldn’t be a zero sum game in anyone’s mind. Americans are quite capable of holding conflicting ideas in their minds – witness the luxury SUV.

Speaking as one employer trying to hire a recent college grad into a pretty cool position with a variety of requirements and opportunities, I can speak to the disaster unfolding. Good technical skills (Adobe, some data-crunching), great communication skills (writing, presentations), and an interest in improving education? Shouldn’t such a position be overwhelmed with applications from graduates like the guy from Goucher? All those bright Millenials working at Starbucks, living in their parent’s basement, and dealing with (on average) $27k of student debt? Apparently not. We’re struggling to attract applicants and those who do apply bring a destructive attitude to screening interviews. Many are out within 5 minutes of the conversation (example: “What do you know about Bridgepoint Education” answer: “Uh, not much – I’ve been applying to a lot of jobs.”).

So if you know any liberal arts graduates out there who are good with software, have decent qualitative chops, like to travel a bit, and are excited about building e-learning software, please send them our way. We’ll give them a solid hearing, even if they have a Psychology degree.

Bottom line: like any really great sci-fi or fantasy story, there is more complexity than just black and white, good vs. evil. But the audience has to be smart enough, and well-read enough, to appreciate the shades of grey while holding on to their well-reasoned opinions. Finally, if we had good five or ten year data on liberal arts majors, and a way of quantifying the competencies (acquired in college or elsewhere) of these graduates, we might see how successful such graduates can be. No educated liberal arts major would argue for borrowing $100k and investing 4 to 5 years of your life pursuing an outcome that is so easily proven suspect.