It might have been a particularly devious form of procrastination, or an excellent life hack, but I found myself answering a plaintive Quora post, from a medical student begging the world to help him overcome procrastination.

I’m a very lazy student and have procrastinated SO much in my life, and I want to stop doing it. I’m currently entering 4th year of medicine, my grades are above average, but I could be much, much better. Tomorrow I have one of my exams, which I will fail because I’ve been avoiding any contact with the book – but I know that as soon as the situation becomes inevitable, I’ll study it. But I don’t want to do that anymore!! I want to be better than anyone else. I don’t want to be mediocre anymore.

It’s Dear Miss Lonelyhearts stuff. You can read the full post, and the 40-something responses, here.

My personal hack comes into the equation because I’ve been trying to get back to my blog for a month or more…partly because I called it out on my bio posting at Education Partners (new gig), and partly because it’s important to me as a creative and thinking outlet.

Procrastination is one of the great unseen forces of destruction in education. Very little is done to help students overcome their fears and sub-optimizing habits. Professors assign term papers week two of a term, then expect final versions six weeks later. Maybe a draft or a bibliography in between. Probably not.

Of course good teachers go much further. But no software company leader would assign a project due in six weeks and then ignore the doer of the work until the delivery date. We do incessant one-on-ones to review projects, discuss blockers, and to coach.

In fact, I’d argue that agile software development is just a peer pressure-driven life hack to help teams avoid procrastination. The opposite of agile is waterfall development, where detailed requirements are written and then engineers go off for six months and build…without any input (warning: this is a dramatic oversimplification). Sounds like school.

Here’s my response to the Quora post…and a triumphant hack to my goal of getting back to Da Blog.

Lots of long answers here…I’d like to read some of them, but maybe after I re-watch Season 4 of the Sopranos…

I taught average and above-average first-year engineering students for 11 years. I was a classic under-achiever myself, and really didn’t kick it into gear until my 2nd year of own engineering school career. 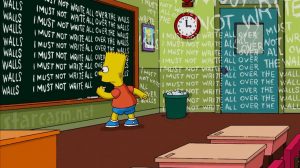 I’m still a procrastinator, to some degree (writing this response…!). Here is what matters, from my reading and thinking:

This last item is the easiest of the bunch, but you have to do it 10 days in a row.

[1] Hacking Habits: How To Make New Behaviors Last For Good

Plug and Chug and Crank…